Emad Shahin is the Dean of the College of Islamic Studies (CIS), Hamad bin Khalifa University, Qatar Foundation and a Senior Fellow at Georgetown University. Before joining CIS, he was the Hasib Sabbagh Distinguished Visiting Chair of Arabic and Islamic Studies, visiting professor of Political Science at Georgetown University and the editor-in-chief of The Oxford Encyclopedia of Islam and Politics. He is tenured professor of public policy, The American University in Cairo (on leave). Shahin holds a Ph.D. (1989) from the Johns Hopkins School of Advanced International Studies, M.A. (1983) and BA (1980) from the American University in Cairo. He has taught in leading universities in the United States including Harvard, Notre Dame, Georgetown, George Washington, and Boston University. His research and teaching interests focus on Islam and Politics Comparative Politics, Democracy and Political Reform in Muslim societies, and Political Economy of the Middle East.

Previously,  Shahin was a distinguished visiting scholar at Columbia University (April 2014-March 2015) and a public policy scholar at The Woodrow Wilson International Center for Scholars (Feb 2014 -Aug 2014).  He was the Henry R. Luce Associate Professor of Religion, Conflict and Peacebuilding at the University of Notre Dame’s Kroc Institute for International Peace Studies (2009-2012). He was visiting associate professor in the department of Government at Harvard University (2006-2009), faculty affiliate with the Kennedy School of Government, and visiting scholar in the Islamic Legal Studies Program at Harvard Law School (2006-2007).

Shahin was nominated two years in a row for the Harvard University Joseph R. Levenson Memorial Teaching Prize, May 2007 and May 2008; and is the recipient of the AUC Excellence in Undergraduate Teaching Award for the Academic Year 2001-2002.

Shahin authored, co-authored and co-edited six books and has more than 50 scholarly publications including journal articles, book chapters and encyclopedia entries. His publications include Political Ascent: Contemporary Islamic Movements in North Africa (1998), co-editorship with Nathan Brown of The Struggle over Democracy in the Middle East and North Africa (2010); and co-authorship of Islam and Democracy (2005 in Arabic). He is the editor-in-chief of The Oxford Encyclopedia of Islam and Politics (2014) and co-editor with John L. Esposito of The Oxford Handbook of Islam and Politics (2013).

THE AMERICAN UNIVERSITY IN CAIRO   Egypt

THE AMERICAN UNIVERSITY IN CAIRO 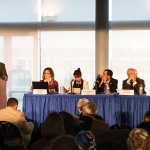