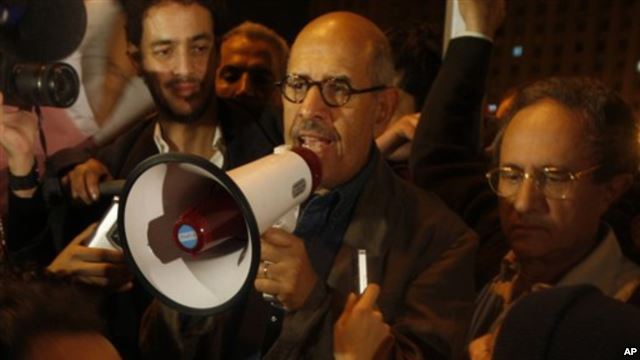 Mohamed ElBaradei is best known as having been chief of the International Atomic Energy Agency (IAEA), the United Nations’ nuclear watchdog, a position he held from 1997 to 2009.

Fawaz Gerges, from the London School of Economics, says there was a great deal of tension between American officials and ElBaradei during that period, especially over Iran’s presumed nuclear weapons program.

“American officials believed that he [ElBaradei] was reluctant to basically accept certain premises about the Iranian nuclear project, that he basically was quite very tolerant towards some of the Iranian statements and public assertions and he was not as forthcoming as his predecessor [Hans Blix of Sweden],” said Gerges. “So the relationship between ElBaradei and American foreign policy was very tense and the Americans, in fact, tried to undermine his candidacy.”

Eventually the United States backed him for a third term. And in 2005, ElBaradei and the IAEA were awarded the Nobel Peace Prize for their efforts to prevent nuclear proliferation.

Now ElBaradei has emerged as a leading voice of the opposition to Egyptian President Hosni Mubarak.

But as Emad Shahin, from the University of Notre Dame says, some Egyptians consider the former diplomat an outsider, someone who has spent 30 years away from Egypt and has just recently returned to his homeland.

“This has deprived him of deep roots in the Egyptian society, a power base, if you wish – like attachments, affiliations say with institutions, political parties, popular organizations and so forth,” noted Shahin. “Of course if you are abroad for 30 years, you lose your roots. It also subjects him to criticism that he is very elitist; he spent most of his life in New York and Vienna; he does not belong to the poor, deprived masses of the Egyptian population.”

On the other hand, Shahin says, spending so much time abroad has its positive side.

“The good side is that he’s coming from outside the system, he has not been tainted by this corrupt system, he hasn’t participated in any official [Egyptian] position for the past 30 years and he is independent with a high profile as a diplomat, as an executive of one of the important international organizations,” added Shahin. “So that also gives him credibility – a lot of credibility.”

Credibility, say analysts, that has been bolstered by his independent stance as IAEA director vis-à-vis the United States.

“You can easily associate with him,” said Shahin. “He’s not really charismatic; he’s not eloquent; he is not very articulate, but I think the impression that he gives – one has to be very fair about this – is that he’s genuine.”

Analysts say ElBaradei, seen as a moderate politically, has become a spokesman for an opposition front made up of various groups including nationalists, centrists, left-leaning parties and the Muslim Brotherhood, Egypt’s oldest and largest Islamist organization.

Gerges says ElBaradei is the most important public face of the opposition.

“He is a unifying figure,” added Gerges. “There is no other unifying figure within the opposition. Unlike the Islamic revolution in Iran in the late 1970s, there is no Ayatollah Khomeini, no cleric or mullah who has the same, you might say, status and prominence in Egypt as Mohamed ElBaradei does.”

But while ElBaradei is currently the face of the opposition to Hosni Mubarak, some analysts – including Aaron David Miller from the Woodrow Wilson International Center for Scholars – urge prudence.

“No-one right now should bank on any single individual becoming a permanent fixture in Egyptian politics,” said Miller. “At best, people should argue these are transitional figures, because we simply don’t know enough. We don’t know enough to predict with any level of certainty who or what will emerge in Egypt””

In Miller’s words: “I would urge caution before we try to identify the new guy on the white horse.”

For the audio report please visit Voice of America