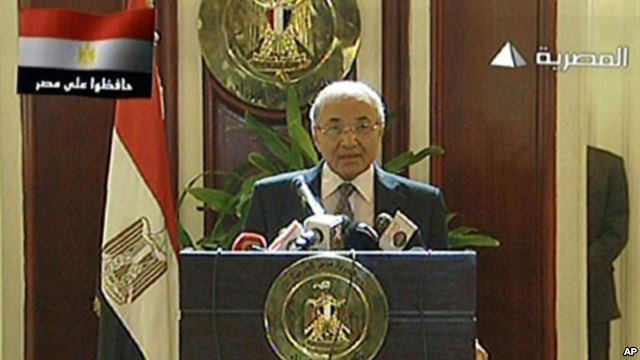 University of Notre Dame Political Science Professor Imed Shahin, an Egyptian scholar, says, “He tried to do two things. One, to extend an apology to the Egyptian people about what happened and second, he promised that…these kind of violent events are not going to happen again. And I believe what he tried to do is disassociate the government from the brutalization of the pro-democracy protesters.”

But professor Shahin says the question is whether the prime minister appeared credible.

“I think that he left so many questions unanswered. And to me the biggest question is the role of the military in all this,” he says, “We know as a matter of fact that the military refrained from protecting the pro-democracy protesters and left them subject to intimidation…[by] what I call, the pro-Mubarak thugs or Mubarak’s thugs.”

Shahin says they were not actually supporters of the president because their purpose was not to express a political opinion. “They came to intimidate, disperse and brutalize the demonstrators.”

What’s more, he says, there may have been other motives behind Thursday’s speech by the prime minister. He says government officials “are still maneuvering, are still buying time in order to regain the initiative.” On the one hand, he says they’re offering to talk with pro-democracy demonstrators, while on the other, they’re still carrying out repressive measures.

“Not only against Egyptians and protesters,” he says, “but against Amnesty International. They are arresting human rights advocates. They are also harassing reporters. They are forcing state civil servants to go out and protest in order to support Mubarak.”

Since the protests began, many observers and analysts said the Egyptian people held the military in high regard, just the opposite view they hold of police.

“The latest response by Mubarak and his insistence to cling onto power is creating a major rift between the state institutions, including the military, the state security, the police, the intelligence [service] and so on and the rest of the population,” says Shahin.

He says the military is a “highly respected institution, but people also know that is a highly privileged military. This military is still a pro-Mubarak military. It has not sided with the people.”

Shahin says if there is going to be a peaceful solution to the Egyptian crisis, then President Mubarak “has to leave and he has to leave now.”

He says two major protests are planned for Friday. One by pro-democracy suppoters, the other by pro-government demonstrators. The Notre Dame professor says he’s concerned about possible violence.

For the audio interview please visit Voice of America